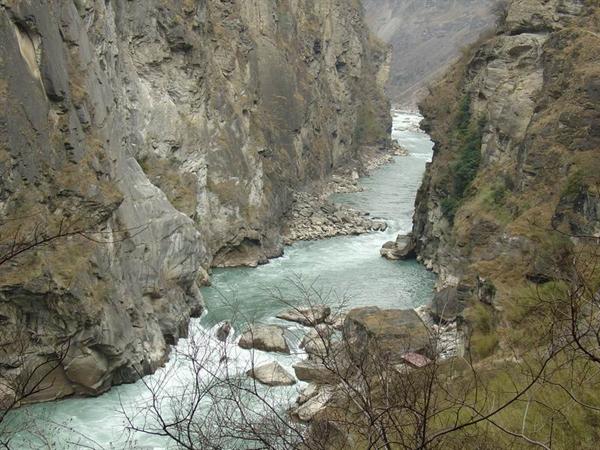 Spawned from a mountain cataract,
The long river surges to the sea.
Its torrents savage its igneous bed,
Yet one blade of rock twists it tightly.
Angry waves plow stone furrows into a maze,
And boats find it difficult to maneuver.
From this point, one man held off an entire army,
And poets found inspiration among the nests of eagles.

Along the Yangtze River is a high cliff. The space for the river narrows dramatically at this point, and the water must back up into a large bay before plunging through the difficult passage. Rocks underneath are treacherous, and even today boats find it difficult to negotiate this stretch.

At the crown of the cliff is the Temple to the White King, in honor of a man from ancient times. Numerous historical events took place here. In medieval times, a famous strategist was able to defeat an entire army with a much smaller force. Later, famous poets found inspiration from the high view of the river and mountains. In more recent times, the high cliff served as the headquarters of a warlord.

There are places in nature that can give people great power, but the character of the individuals determines whether the power is used for war or peace. It is not enough to struggle for vantage points. Position must be used with wisdom.